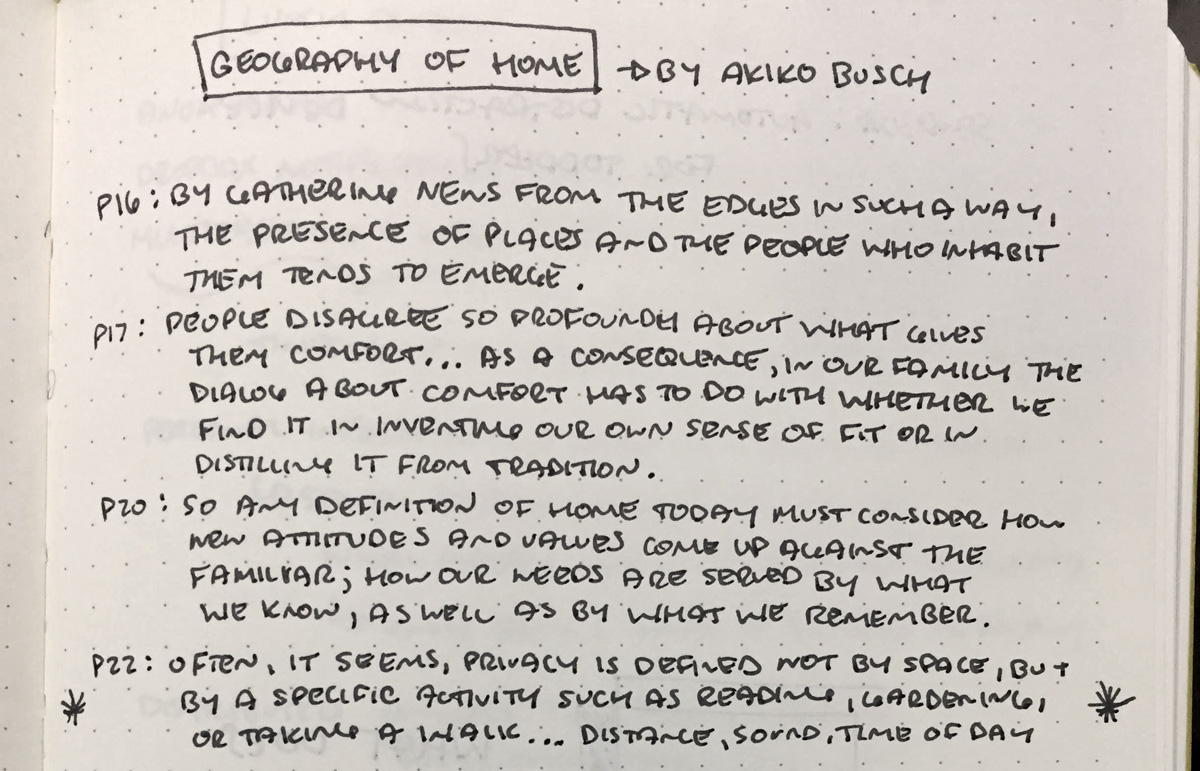 For an autobiographical project building off Leaky Objects, in which I’m allowing myself to undertake a significantly slow design process, this week I read Geography of Home: Writings on Where We Live by Akiko Busch. The book is a collection of beautiful musings organized by room and touches upon notions of comfort, dichotomies between possessions and spaces, clutter, deeply personal rituals, thresholds, processions, and changing functionalities. So much I love in this book while mapping the geography of our tiny home which defies all traditional expectations and conditions. Last year before moving from London to Stockholm, we read The Life-Changing Magic of Tidying Up, an amusing read that we nevertheless abided by and asked everything we own, “Do you bring me joy?” Not only did we end up giving away bags of stuff, but it also prompted many meaningful discussions regarding and aligning views on possessions and a home, in addition to musings around if someday everything will be connected, will all our possessions? And why do we keep them, and do we deserve them if possession implies care, custody, and guardianship? More and more through many of my ongoing projects and initial concepts, I realize I’m interested in overlaps between privacy and care, and perhaps comfort too.

A project I recently started with MSc students is investigating predicting pee habits, which to many is a taboo topic due to the invasive nature of the proposed interaction and an aversion to recognizing private bodily functions. A subsequent discussion with my supervisor on researching taboo topics led to the reading of the paper Accountabilities of Presence: Reframing Location-Based Systems and the website Between the Bars: Human Stories from Prison. In the paper, the authors research paroled sex offenders who are tracked via GPS to explore the intersection between mobility, presence, and privacy; while the website offers a digital platform to share handwritten content from people in prison who do not have access to internet. In both cases, what could be considered extreme or fringe users are researched or designed for, and equally interesting for different reasons, they also serve as interesting case studies that either directly learn from or address the messy realities of society. One of my biggest peeves – designers don’t address the messiness of life nearly enough. So while pee might not be prison, it is definitely an everyday and occasionally very messy, mundane, and universal reality that should not be ignored as I believe there is much to be gained from deviating from designing only delightful experiences.

On a fun, related note, I recently found out that Engelbart conceived what he called the “tinkle toy”, a small waterwheel in a toilet bowl that would spin when pee was run over it, serving as a potty-training aid for boys as the interaction was designed to be an incentive to pee in the toilet. From Markoff’s What the Dormouse Said: How the Sixties Counterculture Shaped the Personal Computer Industry.

A week or two ago, it was difficult to miss Algorithms as culture: Some tactics for the ethnography of algorithmic systems on Twitter. Found it incredibly informative and a nice compliment to Dourish’s The Stuff of Bits: An Essay on the Materialities of Information, which I started last week for implicit interaction book club. The paper also led me to these slides The algorithm multiple, the algorithm material: Reconstructing Creative Practice – in which I was thrilled to see my former UVa architecture professor and brief employer Jason Johnson of Future Cities Lab mentioned.

Lastly, this morning I found this open source software by Rebecca Fiebrink for real-time, interactive Machine Learning that hopefully I can use with Arduino.